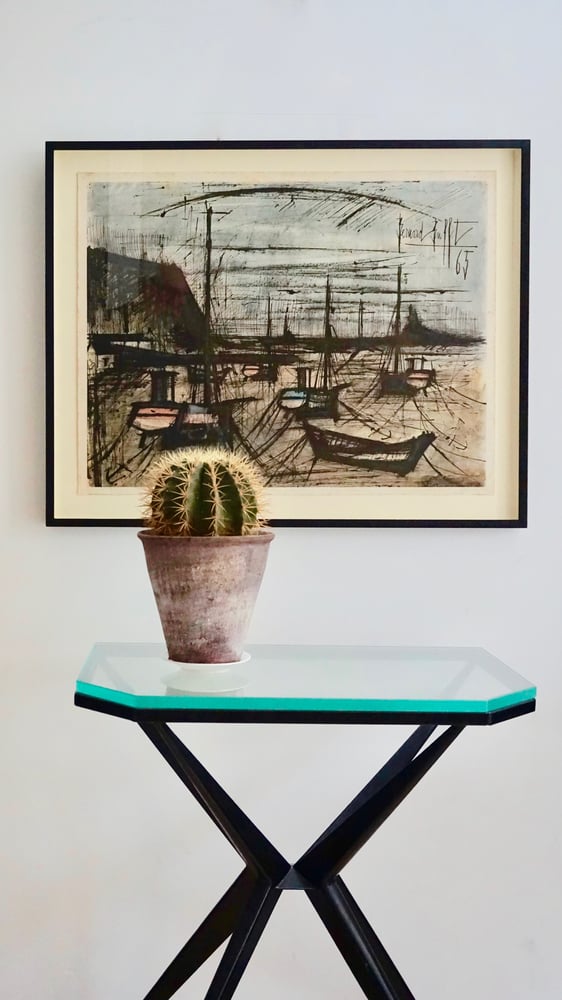 Born in Paris, Bernard Buffet was barely 16 when he enrolled in an art class in a municipal program. He went on to attend Beaux-Arts for two years. Then he started working on his own, independent of any movement or trend. He first showed some of his work with other artists in 1946, which was followed by his participating to various events, Salon d’Automne, Artistes Indépendants, Peintres Témoins de leur Temps. He quickly caught the public’s attention.
Bernard Buffet held his first personal show in Paris in 1947. Together with Lorjou, his elder who gave him encouragement and support, with Rebeyrolle, Minaux, and several others, he founded the group L’Homme Témoin, which would be short-lived.
That was a time when his work took on substance and his popularity shot up. The media started noticing him and he became a public figure. Besides being represented in the main international art shows, Bernard Buffet had personal exhibits in the art capitals of the world. He became the artist of the second half of the 20th century (in 1974, Connaissance des Arts did a survey which showed Buffet as the public’s choice as painter of the post-world war period). In his inimitable style, Buffet takes possession of his subjects. Everyone, connoisseurs as well as the general public, instantly recognizes a Buffet, either in his paintings or his drawings. This certainly explains the measure of his success. In spite of the popular recognition, however, Bernard Buffet never managed to fully convince all of his fellow painters. Who is to say?
Bernard Buffet died in Tourtour on October 4, 1999.
A true 'marmite' figure...
This print is slightly foxed, but is such a brilliant, almost abstract image - to 'restore' it would be to remove its character.
A fabulous image!