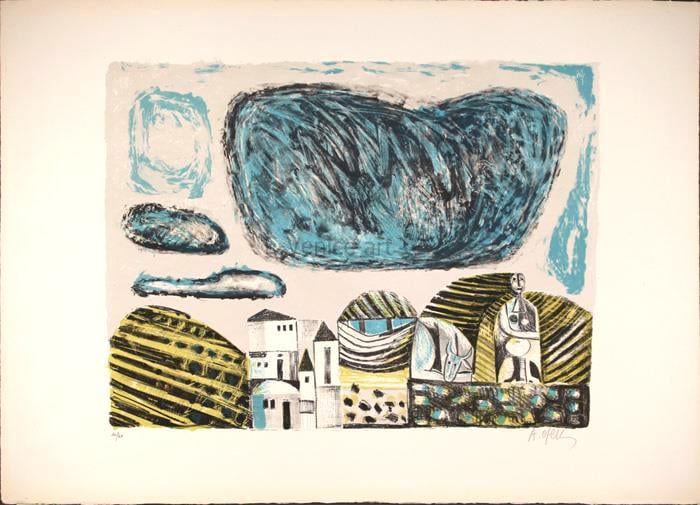 Avraham Ofek was born in Burgas, Bulgaria in 1935. He immigrated to Israel in 1949, and he lived in Ein Hamifratz, a kibbutz near Haifa. He studied at the Academy of Fine Arts in Florence, as well as in Spain and in London, and later taught art in Jerusalem before being appointed head of the Art Department at the University of Haifa. He was one of the founders of the Leviathan group. He represented Israel at the Venice Biennale in 1972.
Avraham Ofek's early paintings of landscape were at both lyrical and rugged; later in his career the landscape was undefined and receded into the background. Near the end of his life, the landscape of Jerusalem became an important motif, reflecting loss and despair. Many of Ofek's landscapes convey a sense of alienation and solitude, as well as nostalgia for the city of his birth, Sofia.
His murals can be seen across Israel, notably at Kfar Uria and the Central Post Office Building (Jerusalem). His sculpture "The Binding of Isaac" is on view at the entrance to Safra Square.
In 1989 the Jerusalem Print Workshop issued a collection of reproductions of his prints edited by Uri Katz, with commentary in Hebrew and English. He died in 1990.