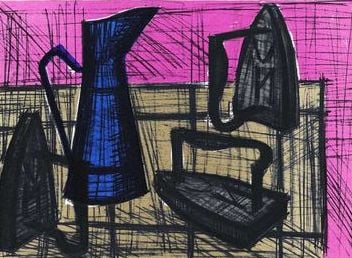 Bernard Buffet was born in Paris, in 1928 - started drawing around age 10 and studied at the Ecole des Beaux-Arts in Paris. Highly precocious, he had his first solo show in Paris in 1947 and in 1948, at age 20, was awarded the Prix de la Critique jointly with an older painter, Bernard Lorjou.
By then he had developed a distinctive style of elongated, spiky forms, somber colors, flattened spaces and an overall mood of loneliness and despair. In signature black outlines that suggested illustrational versions of Giacometti's tenuous scaffolds, Mr. Buffet reduced reality to the point of abstraction. His early works included paintings titled ''The Horrors of War,'' ''Hanging From the Gallows,'' ''The Angel of Destruction'' and others showing death camp victims.
His work seemed to reflect the existential alienation and spiritual solitude of postwar Paris, while his youth and slim good looks positioned him on the crest of the future. Along with Yves Saint Laurent, Brigitte Bardot, Roger Vadim and Francoise Sagan, he was included in a 1958 article in The New York Times Magazine titled ''France's Fabulous Young Five.'' A lengthy profile appeared in The New Yorker in 1959. By then Buffet was exhibiting his work regularly in New York, first at the Kleeman Galleries in 1950, then at Knoedler, John Heller, Niveau and Hutton-Chambard.
By the early 1950's Buffet had gone from being a classic starving artist to one who lived like Picasso. He had two Rolls-Royces, a manservant and a 300-year-old chateau in Provence. Tremendously productive, he was said to have equaled Renoir's output in paintings by age 26. Later, as he found himself overwhelmed with commissions, his work became more stylized and decorative, losing its original impact.
His work is in the collections of the Tate Gallery in London, the Cincinnati Art Museum, the Musee d'Art Moderne de la Ville Paris and the Brooklyn Museum of Art. There are also two museums in Japan devoted to his work. He committed suicide aged 71.