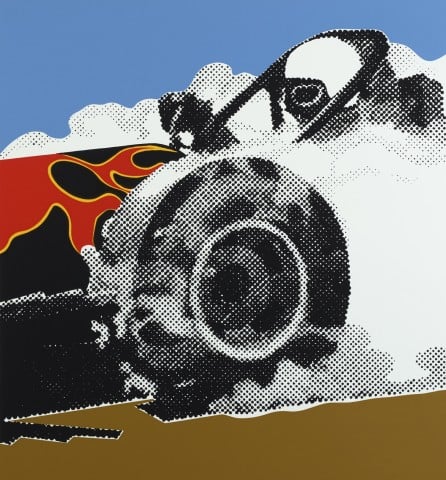 Gerald Ogilvie Laing (1936 – 2011) was a British pop artist and sculptor.
Laing was born in Newcastle upon Tyne in 1936.
He attended the Royal Military Academy Sandhurst and served with the Royal Northumberland Fusiliers as a lieutenant in Ireland and Germany. He soon realized that the military was not what he was looking for and attended Saint Martin's School of Art in London.
At the beginning of the 1960s, while still at Saint Martin's, Laing was introduced to artists in New York City. He met Andy Warhol, Roy Lichtenstein, Jim Rosenquist and Robert Indiana. After art school he moved to the US.
Laing's career took him from the avant-garde world of 1960s pop art, through minimalist sculpture, followed by representational sculpture and then back full circle to his pop art roots.
In 1993 the Fruitmarket Gallery in Edinburgh staged a retrospective exhibition.
In 2012 Sims Reed Gallery staged an exhibition of his prints and multiples, his most comprehensive show of work to date.