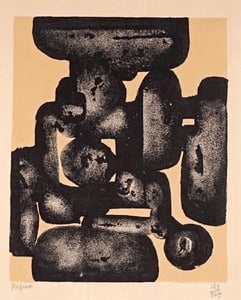 His grandfather was murdered by Cossacks. His father, a first violin at the Warsaw Conservatory, was deported to Siberia in 1905, for participating in the uprising of the Poles against the Russian invasion. This kind of heritage can leave one constantly contemplating about the real nature of life. No wonder the great Picasso described Ladislas Kijno as a powerful artist, a little crazy and perhaps too inclined to philosophise. Art and philosophy are two basic elements of the mixture that made Kijno one of major figures in the Art Informel painting movement. His experimentation in the use of aerosols earned him a title – the spiritual father of the French street art. Considering his age, this comes as quite a compliment for this visionary.
He died in 2012.

lithograph
1989
signed and numbered in pencil