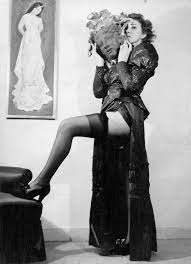 Leonor Fini was an Argentine-Italian painter who spent much of her artistic career in France. Associated with the Surrealist movement, Fini’s self-portraits and mythological paintings focused on eroticism and dreams. “Paintings, like dreams, have a life of their own and I have always painted very much the way I dream,” she once said. Born Eleanora Fini on August 30, 1907 in Buenos Aires, Argentina, she moved with her mother to Trieste in Italy when she was still an infant. Growing up, Fini took an interest in morbid subject matter and often drew cadavers at the local morgue. Though she had no formal artistic training, Fini studied the works of the Italian Mannerist painters and their use of elongated forms. In 1931, the artist moved to Paris where she befriended Giorgio de Chirico, Max Ernst, and Leonora Carrington. Fini’s eccentric lifestyle of cross dressing, carrying on homosexual relationships, and eating dinner with her 23 cats, continued throughout the decades. She notably designed the costumes for Federico Fellini’s film 8 ½ in 1963, and was the subject of many photographs and poems during her lifetime. Fini died on January 18, 1996 in Paris, France. Today, the artist’s works are held in the collections of the Metropolitan Museum of Art in New York, the Centre Georges Pompidou in Paris, and the Tate Modern in London, among others.

When Marcel Schwob published "The Book of Monelle" in French in 1894, it immediately became the unofficial bible of the French Symbolist movement, admired by such contemporaries as Stéphane Mallarmé, Alfred Jarry and André Gide. A carefully woven assemblage of legends, aphorisms, fairy tales and nihilistic philosophy, it remains a deeply enigmatic and haunting work more than a century later, a gathering of literary and personal ruins written in a style that evokes both the Brothers Grimm and Friedrich Nietzsche. "The Book of Monelle" was the result of Schwob's intense emotional suffering over the loss of his love, a "girl of the streets" named Louise, whom he had befriended in 1891 and who succumbed to tuberculosis two years later. Transforming her into the innocent prophet of destruction, Monelle, Schwob tells the stories of her various sisters: girls succumbing to disillusionment, caught between the misleading world of childlike fantasy and the bitter world of reality. A secret influence on generations of writers, from Guillaume Apollinaire and Jorge Luis Borges to Roberto Bolaño, Marcel Schwob (1867-1905) was as versed in the street slang of medieval thieves as he was in the poetry of Walt Whitman (whom he translated into French). Paul Valéry and Alfred Jarry both dedicated their first books to him, and he was the uncle of Surrealist photographer Claude Cahun.

etching
signed and numbered in pencil by the artist
1976

as with all the prints on the website: please call if you require any further information or clarification - details are also in the 'how to buy' section found on the 'home' page