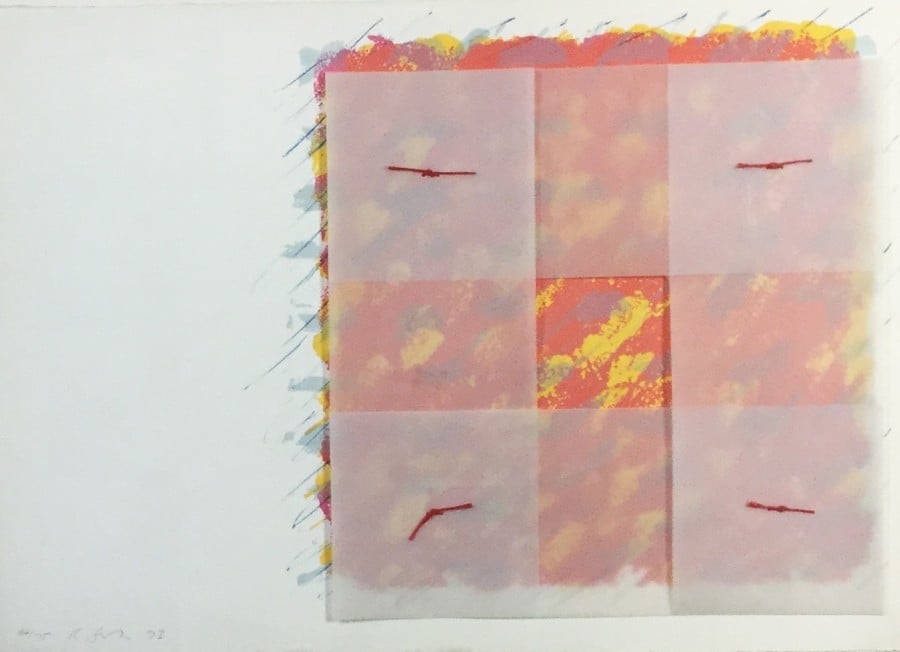 Painter and printmaker. He studied at the Royal College of Art from 1954 to 1957, and from 1959 to 1961 lived in New York on a Harkness Fellowship, producing paintings that combined the formal qualities of the work of American abstract painters, with references to American commercial culture, with its lush seductive colours, exploitation of magnification and soft-focus effects and, generally, its stimulation of desire and fantasy. His ambition to make painting share a common sensibility with media outside conventional fine art, such as film and photography, began to wane by 1968.
Smith's influential use of shaped canvases sometimes physically extended into space and initially referred to devices used in advertising to promote products and to overpower and entice the spectator. Gradually such direct references were minimised in favour of the largely self-contained abstract qualities of shape, support, colour and surface. Repetition suggests some response to Minimalism, although he resisted the call to new materials, comparing his cutting and folding of canvas to large-scale origami, and often using sequential changes to suggest the passage of time, as in a diary or calendar.
Bulky constructions such as these were followed from 1972 by paintings using components of tent manufacture (aluminium tubes, canvas and string), their structures often resembling kites. These paintings focused on the physical constitution of painting as a stretched and suspended surface, playing with relationships of colour and shape, drawing and structure. After resettling in New York in 1976, Smith's ‘kites' evolved into larger-scale architectural decoration, often in response to commissions.

lithograph in colours with carbon tracing paper and plastic strings on heavy wove paper
1973
signed, dated and numbered in pencil
edition of 75