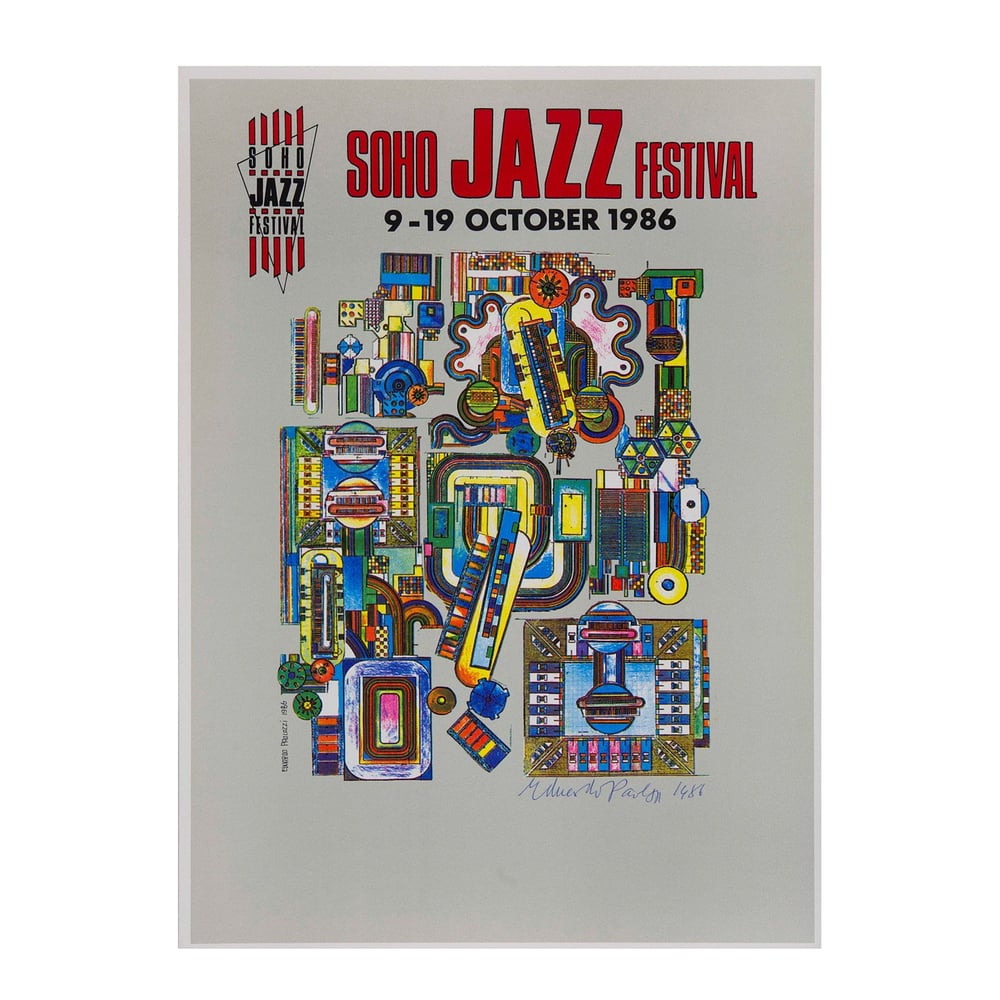 Eduardo Paolozzi was born on 7 March 1924, in Edinburgh.
Paolozzi studied at the Edinburgh College of Art in 1943, briefly at Saint Martin's School of Art in 1944, and then at the Slade School of Fine Art from 1944 to 1947.
In Paris, Paolozzi became acquainted with Alberto Giacometti, Jean Arp, Constantin Brâncuși, Georges Braque and Fernand Léger. This period became an important influence for his later work.
After Paris, he moved back to London - his studio in Chelsea was a workshop filled with hundreds of found objects, models, sculptures, materials, tools, toys and books. Paolozzi was interested in everything and would use a variety of objects and materials in his work, particularly his collages.
Paolozzi came to public attention in the 1950s by producing a range of striking screenprints and "Art Brut" sculpture. He was a founder of the Independent Group in 1952, which is regarded as the precursor to the mid-1950s British and late 1950s American Pop Art movements. His seminal 1947 collage "I was a Rich Man's Plaything" is considered the earliest examples of Pop Art.
Paolozzi is recognised for producing largely lifelike statuary works in a cubist manner.
He taught sculpture and ceramics in Hamburg (1960–62), California, (in 1968) and at the RCA.
He was a professor at the Fachhochschule in Cologne from 1977 to 1981, and later taught sculpture in Munich.
Paolozzi’s graphic work of the 1960s was highly innovative. In a series of works he explored and extended the possibilities and limits of the silkscreen medium. The resulting prints are characterised by Pop culture references and technological imagery. These series are: As Is When (12 prints on the theme of Paolozzi’s interest in the
In the 1960s and 1970s, Paolozzi artistically processed man-machine images from popular science books by German doctor and author Fritz Kahn (1888–1968).
Paolozzi mosaic designs for Tottenham Court Road Station. Location shown is the Central Line westbound platform (1982).
Paolozzi was appointed CBE in 1968 and in 1979 he was elected to the Royal Academy.
He was promoted to the office of Her Majesty's Sculptor in Ordinary for Scotland in 1986, which he held until his death. He also received an Honorary Doctorate from Heriot-Watt University in 1987.
Paolozzi was knighted by Queen Elizabeth II in 1989 as Knight Bachelor (Kt).[14]
In 1994, Paolozzi gave the Scottish National Gallery of Modern Art a large body of his works, and much of the content of his studio. In 1999 the National Galleries of Scotland opened the Dean Gallery to display this collection.
In 2001, Paolozzi suffered a near-fatal stroke, mading him a wheelchair user, he died in London in April 2005. In 2013, Pallant House Gallery held a major retrospective, followed by the 2017 retrospective at the Whitechapel Gallery.

lithograph
1988
signed in black pen by the artist
unknown edition