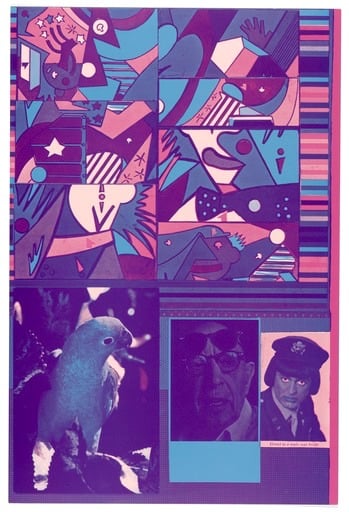 Eduardo Paolozzi: General Dynamic F.U.N.
50 screenprints and photolithographs by the pioneer of Pop Art, Sir Eduardo Paolozzi (1924-2005).
Created between 1965 and 1970, Paolozzi’s canny alchemy is vividly apparent in General Dynamic F.U.N. The series illustrates how the self-styled ‘wizard in Toytown’ employed the technologies of mass-reproduction to gorge on its idols – the household names and familiar faces of consumer advertising, high fashion and Hollywood in the 1960s.
A compulsive collector and jumbler of icons, Paolozzi is equally revered for his mechanistic sculptures and his kaleidoscopic print projects. He transformed the mundane, the derelict and the mass-produced into images that zap with electric eclecticism and impress with their graphic complexity. The artist's friend and sometime collaborator, J.G. Ballard, described General Dynamic F.U.N. as a 'unique guidebook to the electric garden of our minds'.
The prints, which bear idiosyncratic titles such as 'Totems and Taboos of the Nine-to-Five Day'; 'Twenty Traumatic Twinges' and 'Cary Grant as a Male War Bride', do not occupy a rigid sequence but can be assembled and viewed in any order.
For Paolozzi, the modern age, exposed as ephemera, is a necessarily fragmented collision of visual stimulus and influence, and his work is a 'health warning for an uncreative and thriftless society'.