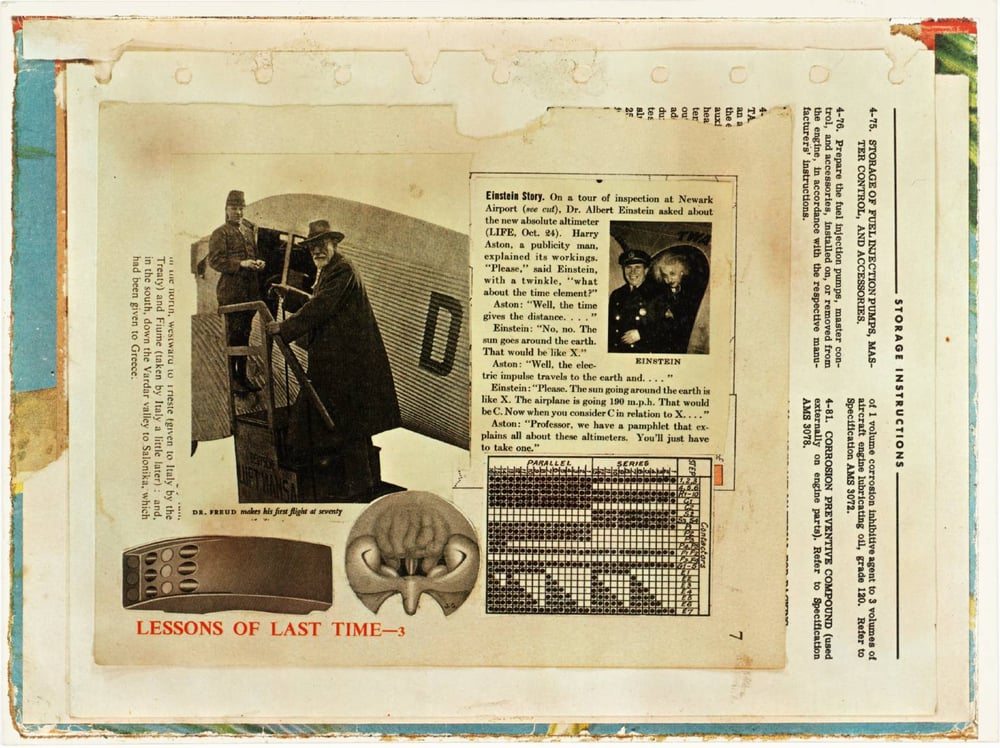 The ten collages T01458 to T01467 are from a larger group, consisting of some of the collages Paolozzi made between 1941 and 1952, and collectively entitled ‘Bunk’. This title was derived from a detail of one of the collages in the group, ‘Evadne in Green Dimension’ 1952, which contains the printed word ‘BUNK!’. In the catalogue of his Tate Gallery retrospective in 1971, the artist states beside a reproduction of this collage (p. 49) that this word gave the title to the lecture he gave at the Independent Group. This lecture, at the premises of the I.C.A. in London in 1952, was the first event to be presented in the programme of the Independent Group. Its main feature was the projection by Paolozzi through an epidiascope of a large number of images mainly removed from magazines and including material from science fiction, aviation, technology, comics, advertising for food, domestic appliances, cars, films, etc., pin-up pictures, news photographs and medical diagrams. Although many of the images projected were whole pages from magazines, untampered with except by the act of isolation, the artist told the compiler that the collages from ‘Bunk’ were among the material that was projected.
In 1972, reproductions of forty-five of the ‘Bunk’ collages were published by Snail Chemicals (Publishing), in two editions comprising a total of 170 sets. The ten images of which the original collages are in the Tate Gallery have the following numbers in this portfolio: T01458 (9); T01459 (10); T01460 (15); T01461 (22); T01462 (25); T01463 (33); T01464 (36); T01465 (43); T01466 (6); T01467 (4).